Using a USB-RS232 cable, it is easy to make the Pluto board USB compliant.

Here we are using a USB-RS232 cable from KNJN.com (see picture below). The cable works great but has the disadvantage of having a case made of molded plastic. As you'll see later on this page, we can pick-up the USB power from the cable once the case has been removed, but the molded plastic is hard to remove. If you have the chance to pick-up a cable, choose one made with a non-molded case. But still pick one with a good quality chipset as some very cheap cable don't work well (the ones based of FTDI chipsets usually work great).

That's easy, plug the USB-RS232 cable to the TXDI board, and Pluto becomes USB compliant. Just make sure that the USB cable uses the same COM port than Pluto's software (both can be changed, so you are sure to find a common ground). 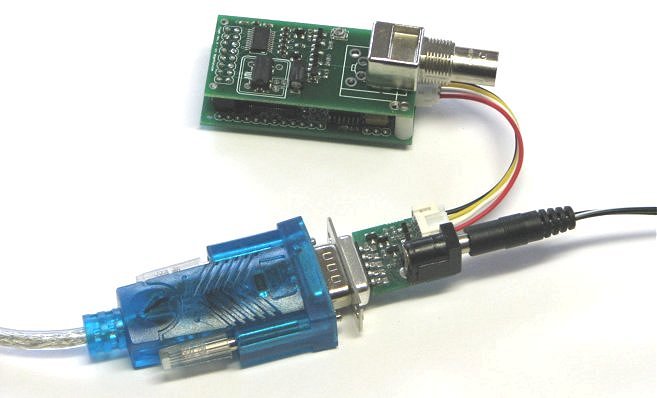 Now it is tempting to power Pluto/Flash directly from the USB cable. Since the combo consumes only about 100mA, that's no problem. We have to open the USB cable though. Since I have a KNJN cable on hand, I took my cutter and cut patiently into the molded plastic. After a little while, I got to the guts of the cable showing an FTDI FT232BM chip on the top, plus an SP213 on the back.

The 5V power is easy to find, so two wires can be soldered between the USB cable and the TXDI.

Putting everything in a box

Last piece of our masterpiece, let's put everything in a box. One hole in the front for the BNC, one in the back for the USB cable. 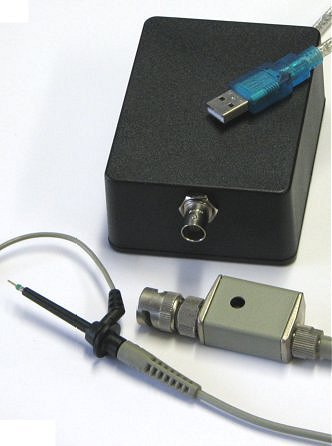