The flashy board has an input bandwidth well above Nyquest's maximum theoretical value of 40MHz (we're using a Flashy clocked at 80MHz here).
So what happens if we feed Flashy with a signal above 40MHz?

The test setup consists of an HP8640B signal generator, connected directly to Flashy.
The generator is capable to generate sine waves at up to 550MHz. 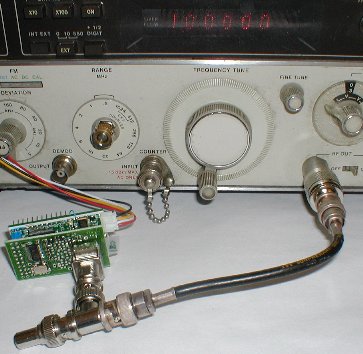 First, the generator is OFF.

We apply a 1.000MHz test signal and we calibrate the output. Let's get 7 vertical divisions here.

That's a "ghost" signal (80MHz-79MHz=1MHz)
The interesting thing is that, since the signal is periodic, we can actually see how the 79MHz look (even if the period says 1MHz, the shape is the actual 79MHz signal).

The generator can't go any faster. And we are well above the abilities of Flashy anyway.